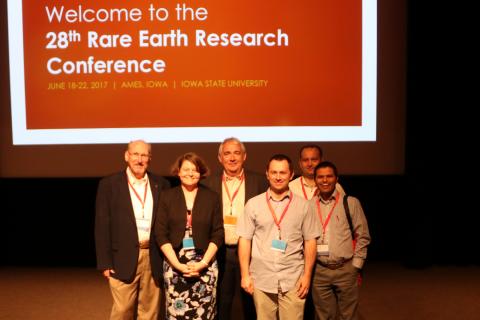 CaloriCool researchers, together with Ames Laboratory and Iowa State University, helped organize and host the 28th annual Rare Earth Research Conference in Ames, Iowa June 18 -22. Over 200 scientists from around the world joined in the multi-day symposium on the latest in rare-earth research.

“Rare earth science is more exciting than ever,” said Ames Laboratory Director Adam Schwartz to the assembled scientists. “The technological applications of rare earth elements are at an all-time high, and that just makes the work that all of you do all much more important.”

CaloriCool Director and Conference Co-chair Vitalij Pecharsky, said “I am absolutely thrilled with the level of science presented by researchers from North and South America, Europe, Asia, Australia and Africa.  Ames, of course, is the place where modern rare earth research took roots,” he continues, “and broad participation of young scientists – 20 percent of the attendees were graduate and undergraduate students – is testament to the fact that rare earth science has bright future in Ames and worldwide.”